Are artificial sweeteners a sweet deal – or just bad for your health? Dietitian Melissa Meier tunes into the sweet talk.

Artificial sweeteners make you feel you can have your cake and eat it too. They’re super sweet, yet contain few or no kilojoules, so they are often used in ‘diet’ foods and drinks in place of sugar. With many of us wanting to reduce our sugar intake, that sounds like a great idea. But is it?

The first is non-nutritive sweeteners such as aspartame and saccharin. (You’ve probably heard of sugar substitutes such as Equal and Splenda – this is where they fit in.)

Non-nutritive sweeteners are kilojoule-free. They can often be found in diet soft drinks and cordials, confectionery and chewing gum, and some yoghurts. They’re even in toothpastes.

The next category – nutritive sweeteners – are not kilojoulefree, but have far fewer kilojoules than sugar. These are sugar alcohols (also called polyols) such as sorbitol or mannitol.

You’ll find them in some jams, chocolates and chewing gum.

The third category – natural intense sweeteners – is primarily stevia, which has almost no kilojoules. Stevia is used in some drinks, confectionery and snack bars.

A new kid on the artificial sweetener block is monk fruit extract, which can be found in a blend with stevia. 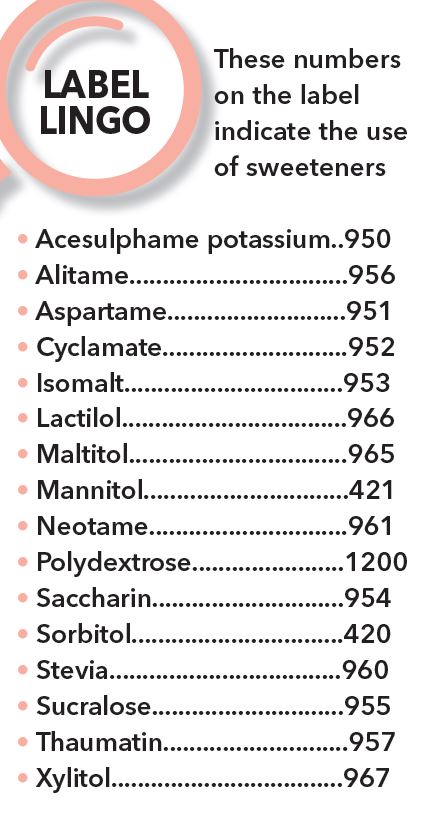 The safety – or otherwise – of artificial sweeteners created heated debate. During the 1980s, saccharin, for example, was classed as a possible cancer-causing agent, although a later body of research went on to debunk this.

Aspartame came under the spotlight after a 2006 study linked the sweetener to increased cancer rates in rats.

However, after analysing all of the scientific literature (and it has been much-studied), Food Standards Australia New Zealand (FSANZ) tell us it is safe to use and there are very robust studies concluding aspartame does not have the potential to cause cancer in humans.

One group of people who should definitely avoid aspartame, however, are those with a rare genetic disorder called phenylketonuria. People with the disorder are unable to metabolise phenylalanine, one of the by-products of aspartame breakdown.

The jury is still out about sweeteners and weight management. You’d think that switching from sugar to artificial sweeteners would be an easy way to reduce kilojoules and lose weight, but some argue that because our body doesn’t get its desired energy after the sweet sensation, we compensate by sourcing those kilojoules elsewhere.

Although many questions are yet to be answered, it’s important to point out that FSANZ stringently tests all artificial sweeteners before they can be introduced to the food supply.

HFG’s verdict? Just because something is ‘sugar free’, you don’t have to eat it by the bucket load. If you’re consuming a lot of artificial sweeteners, you’re probably missing out on valuable nutrients from core food groups. That’s because artificial sweeteners are typically used in discretionary foods such as confectionery and flavoured drinks. As always, it’s important to base your diet on real food.

An excessive amount of polyols has a potent laxative effect. How much sugar is in that sweetener? HFG guide to sugar and sweeteners The truth about artificial sweeteners